The verb “heading to” is an informal way to say “going to” or “traveling to,” and the expression “I’ll give you a ride” means “I will take you in my car to the destination.”

The phrasal verb buckle up means to put on your seat belt: 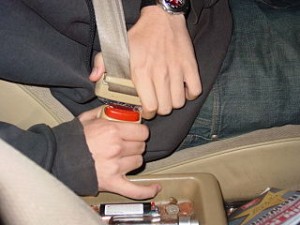 #3 – There’s a huge traffic jam on the highway.

A highway (also called a freeway or expressway) is a wide street where the traffic goes fast. A traffic jam is when the traffic is stopped or slow. 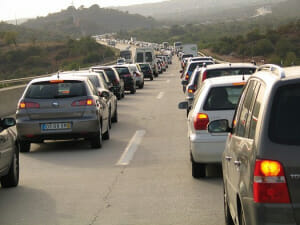 Most roads and highways are divided into lanes – for example, the road in the photo above has two lanes. An exit is a road to leave the highway, to get off the highway. If a lane is exit-only, it means that the cars in that lane must leave the highway.

This phrasal verb means to drive your car to the side of the road and stop. The side of the road is sometimes called the shoulder. You usually pull over if you think there is a problem with the car – such as in this case, when the car is overheating – that means the engine is getting too hot.

If another car cuts you off, it means the other car suddenly drives in front of your car. It is a dangerous movement because it can cause an accident.

When you are taking a road trip (a long trip by car), you’ll occasionally need to make a pit stop – that means to stop at a store or station to use the bathroom and/or buy food and drinks.

#8 – Turn left at the light and then follow the signs for the airport.

The red, yellow, and green lights that control traffic are called traffic lights. However, when giving directions, some people simply say “at the light.”

Information and directions are posted along the road on signs: 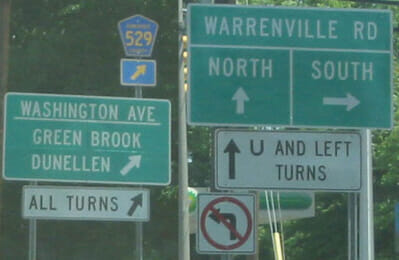 #9 – I slammed on the brakes when I saw a child run in front of the car.

There are two phrasal verbs we use to describe change in the car’s velocity – slow down to drive the car slower, and speed up to drive the car faster. Speed is another word for “velocity,” and most roads have a speed limit – the maximum velocity at which you can drive your car.

#11 – You forgot to turn off your blinker after you merged.

The yellow or orange lights on the sides of the car that indicate a left or right turn are called turn signals or blinkers:

You need to activate your blinker to inform other drivers that you plan to turn left, turn right, or to merge – that means to move from one lane to another.

A backseat driver is a person in the car who is not driving, but who criticizes the driver’s abilities or who makes lots of suggestions and gives lots of tips for the driver to improve. Most people think that backseat drivers are really annoying! 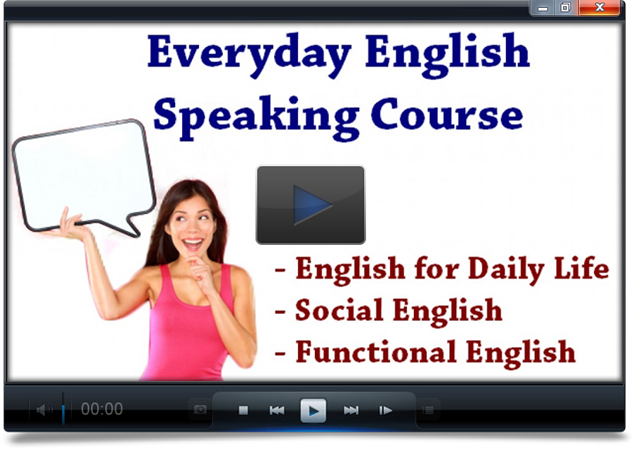 Learn more about the Speaking Course
Tweet Pin It