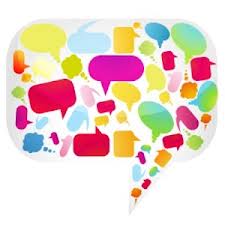 You might yell, shout, scream, or shriek if you are:

Scream and shriek can also refer to making loud vocal sounds that are not words (especially in the case of fear, surprise, or pain).

People often cheer at sports games and after a great music/theater performance:

This is an example of whispering.

You would whisper in a movie theater so as not to disturb the other people – or when you don’t want anyone else to hear what you’re saying.

mumble = speak quietly and  not clearly, without opening your mouth very much

People often mumble when they don’t want to talk, or when they’re nervous, embarrassed, or have low confidence in general.

The difference between these two is that mutter is usually complaining and saying negative things, whereas murmur is neutral.

A similar word to mutter is grumble, meaning to complain in a quiet, low-pitched voice.

chat = have an informal conversation

You can use “chat” for informal conversations both online and offline.

If someone says: “P-p-please don’t d-do that” – they are stuttering or stammering. Some people do this frequently because they have a speech problem, and other people do it occasionally when they are extremely afraid or nervous.

Gossip is both a verb and a noun for this type of speaking.

Learn more about the Vocabulary Builder Courses
Tweet Pin It