Hi students! It’s Shayna from EspressoEnglish.net, and this week our Words of the Day will all be verbs. We’ll start with an interesting one that you might not think is a verb, and that is waffle. Repeat it after me – WAF-fle. Waffle.

You might already know this word as a noun, it means a type of cake with squares, like this: that’s a waffle, we usually eat waffles for breakfast. 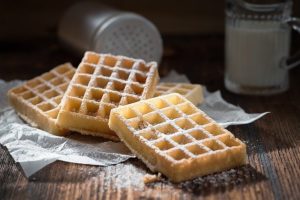 Maybe you don’t like your job and you’re considering quitting. After a hard week, you think “I’m DEFINITELY quitting!” but then later you think “Hmm, but I don’t really have much savings, so how long can I survive without a salary?” then another day you think, “But I really want to take my career in a different direction, and I can’t do that at this job” and then later you think, “Actually this job’s not so bad, at least I’m comfortable here.” This action of going back and forth and being unable to commit to a decision is waffling.

Sometimes leaders and politicians and famous people waffle in the viewpoints they present to the public. Like if someone asks a politician if he supports a particular cause, and in one interview he sort of implies he supports it, but then in an article he expresses the opposite point of view, and then he votes in favor of the cause, but later he does something that goes against it. This could also be described as waffling because he’s not committing firmly to one side or one opinion.

I hope you learned something new today – this is a word a lot of English learners don’t know, but it’s a fun and descriptive verb for that action of going back and forth in a decision. Bye for now – I’ll talk to you next time.