(See the Vocabulary list for the definitions of words in green.) 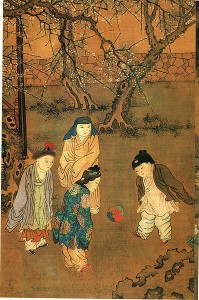 Soccer is one of the world’s most popular sports, with approximately 250 million players in over 200 countries. It is also the most-watched sport on TV, with an audience in the billions.

An ancestor of soccer was played in ancient China, beginning around 300 BC. The sport was called cuju (‘kick-ball’) and was used as fitness training for the military as well as for entertainment. Cuju flourished during the Song Dynasty, when clubs and leagues with professional players were formed.

In Europe, a violent form of soccer was played during the Middle Ages. It was a chaotic game with an unlimited number of players on each team, resulting in many injuries and even deaths. In 1314, the sport was banned by royal law in London.

Modern soccer developed in England in the 19th century, when rules were established to standardize the various types of soccer played in school and university clubs. FIFA was founded in 1904 to oversee international competitions such as the World Cup, the first of which was held in Uruguay in 1930. Nowadays, there are also regional soccer championships on every continent.

audience = people who watch (TV, a show, a movie, etc)

standardize = to make the same

coach = the person who trains, teaches, and directs the team

field = the place where soccer is played

foul = an illegal action in the game

kick = to hit the ball with your foot

referee = the person who controls the rules of the game, who starts and stops the game

score a goal = to put the ball into the goal

shoot = to kick the ball at the goal (try to score)

tie = when the game ends and both teams have the same score, for example, 2-2

Congratulations - you have completed Soccer Quiz. You scored %%SCORE%% out of %%TOTAL%%. Your performance has been rated as %%RATING%%

Your answers are highlighted below.
My school has a beautiful new soccer __________ where the university team will play its games.
Eduardo committed three violent ________ and was given a red card.
The defender ____________ the ball across the field.
My 8-year-old daughter wants to play soccer. Does our town have a children's _____________ ?
He's such a selfish player; he never ___________ the ball.
The __________ blew his whistle to signal the end of the first half of the game.
Our team's ____________ prevented the other team from scoring, and we won 2-0.
The ___________ has developed a new strategy for our team to play better.
Ronaldinho ______________ in the game against Santos.
She __________ with her left foot and scored a goal.
It was an exciting game, but it ended in a __________, 0-0.
Once you are finished, click the button below. Any items you have not completed will be marked incorrect. Get Results
There are 11 questions to complete.
You have completed
questions
question
Your score is
Correct
Wrong
Partial-Credit
You have not finished your quiz. If you leave this page, your progress will be lost.
Correct Answer
You Selected
Not Attempted
Final Score on Quiz
Attempted Questions Correct
Attempted Questions Wrong
Questions Not Attempted
Total Questions on Quiz
Question Details
Results
Date
Score
Hint
Time allowed
minutes
seconds
Time used
Answer Choice(s) Selected
Question Text
All done
Need more practice!
Keep trying!
Not bad!
Good work!
Perfect!
Tweet Pin It