600 Confusing Words E-Book
If you frequently confuse the verbs SAY, TELL, SPEAK, and TALK, you’re not alone – these are some of the most commonly confused English words!

They seem like they all mean the same thing – and they are similar – but we actually use them differently in English. In this lesson, I’ll teach you the difference between say, tell, speak, and talk, and help you avoid some common mistakes with these words.

For more lessons like this, check out my e-book, 600+ Confusing English Words Explained. When you read this e-book, you’ll have a much better understanding of how to use English words correctly.

Tell means “to give information to a person” – so tell (present) and told (past) are always followed by a person.

With say (present) or said (past), we can use these structures:

Structures #1 and #2 are the most common in spoken English.

Use speak (present) and spoke (past) with languages, and with talking in general (no specific details). We can use speak with (someone) and speak to (someone)

In the case of speak with (someone) and speak to (someone), you can also say talk to or talk with.

However, you can’t use “talk” with languages:

I want to help you speak English better, so that you can talk with people more confidently! That’s why I’m telling you about my e-book, 600+ Confusing English Words Explained. Other students say that this e-book has really helped them understand English words and when to use them.

There, I just used all four words from this lesson – speak, talk, tell, and say! I hope you’ve enjoyed this video, and I’ll talk to you next week. 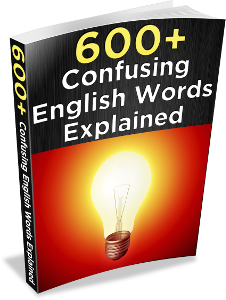